Trailer
The project
From the desert to the Mediterranean

For more than 15 months, the production company Boxfish accompanied the sea rescue ship ALAN KURDI of the association "Sea-Eye" as a media team during five missions on the Mediterranean Sea. In addition to numerous moving moments at sea, material was also shot in countries such as Niger, Tunisia, Libya, Italy and Malta. We would now like to present this material, which has not yet been published but is very close to our hearts, to the public in the form of the documentary film "Route 4".

Although "Route 4" is framed by a theme, namely the danger that prevails in Libya and emanates from there, it is not the aim to tell a continuous story. Rather, we want to give viewers a glimpse into what they have experienced and seen by focusing on the individual fates of those seeking protection.
We want to draw attention to the problems created by the EU itself. We want to draw attention to the suffering and hardships people face on their journeys, and to the incredible work of the NGOs (in this case Sea-Eye) who are the only ones taking on the task of rescuing people in the Mediterranean. 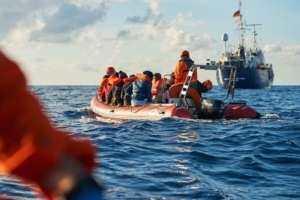 Heidelberg - Die Kamera (as part of the International Weeks against Racism) - 24.04.

Sea-Eye e. V. is a civilian aid organisation that was founded in 2015 to no longer stand idly by and watch the dying in the Mediterranean Sea. With the rescue ship ALAN KURDI (2018-2021) and the Sea-Eye 4 (from 2021), they search for people in distress at sea on the world's deadliest escape route and fight against the daily loss of human life at sea.

Boxfish is an agency for audiovisual content and excellent advertising from Würzburg. Our love for the medium of film, our passion for telling stories in moving images and our aspiration to create added value through high-quality visual advertising have led to our long-standing cooperation with Sea-Eye and ultimately to our heartfelt project "Route 4". We regularly support social and sustainable projects.

Martina Chamrad is a director from Munich. In "Route 4" she has made it her task to tell a story from the collected material that focuses on the dangerous journey of the protagonists and provides a very special insight into the topic of "Libya".

Every donation helps people in need